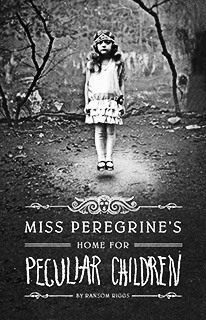 I read the reviews and comments on this book at least a dozen times over the last year before I finally decided to buy it. And I will admit the only reason I did was because it happened to be on an amazing sale that day. I will be the first to admit that the premise of the story is a little bit odd, and I do usually like odd, but I was afraid it was going to delve into the land of cheesy. Honestly, when the cover of the book is a creepy little girl levitating and managing to look menacing all at the same time it certainly sends a message.

That message is this book is either epic or chintzy.

We start with a pre-teen or early teen boy. I’m going to call him Bob because I simply don’t care to remember what his name actually was. So Bob is a weak, whiny little brat of a boy that offends his grandfather and doesn’t appreciate what is given to him.

And yes, I very much doubt that was how he was supposed to be perceived.

Bob instead of helping his grandfather, who calls and specifically asks him for help, assumes he is delusional and his grandfather ends up dead. Bob now sees an evil shadow in the forest with his dead grandfather, who loved his grandson very much, and our main character spends the next several chapters in therapy. At this point, lets just say I was more than ready to put the book down. But, I never start a book that I don’t finish, so onward we plod.

Wimpy Bob and his father go through the grandfather’s things and Bob finds a box of old photos of children doing things like you would find in a side show act. Levitating, strong man, invisible boy etc etc etc. His grandfather had shown him the photos years before so Bob decides to go to an island. There is a heartfelt and touching story behind all of that but, just like his name, I really don’t care to remember.

In a nutshell, Bob finds the kids, gets the hots for his grandfather’s ex who never grew up, and nearly gets the invisible boy killed. The evil shadows show back up and now Wimpy Bob is expected to save the world. My impression was that this was supposed to be a coming of age story juxtaposed with children that never age. I also got the impression that this story is supposed to give hope to physically weak or odd children, but mostly the whole story is a bit creepy. And not creepy in a good way. We have all read stories that are an entertaining type of creepy. This story isn’t one of those.

Nor worth my time or yours.

As an afterward, since I initially wrote this review some time ago a lot of positive press has shown up regarding this story. Out of curiosity I pulled it up on Amazon and it has a 4.3 out of 5 as of this date. I just wanted to mention that I have seen that positive press and for the life of me can’t figure out what they are talking about. However, as the old saying goes, one man’s trash is another man’s treasure. A day will never come when all of mankind agrees on all things.