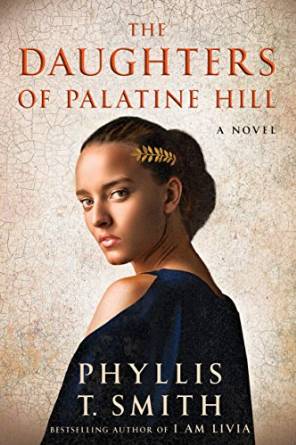 I am unsure of where to even begin. Do you ever finish reading a book and are left feeling just completely empty? When I started reading this book on Monday it drew me in in a way that no other story has done in a long time. It is actually the first paper book I have purchased in a long time as I have been using my Nook for the most part. I was desperate to have it and it wasn’t available as a digital copy. I finished reading it just a few minutes ago, as I write this, and I’m still not entirely sure where I stand with it. I neither love nor hate it. But Phyllis Smith did something wonderful with this novel. She made me feel.

This work follows the lives of three women. Julia (daughter of Caesar Augustus), Livia (wife of Caesar Augustus), and Cleopatra Selene (orphaned daughter of Antony and Cleopatra) are our daughters of Palatine hill.  Each chapter has one of these three women narrating it. It takes a moment of personal mental adjustment at the beginning of each chapter to alter your view so that you can understand where each of the women are coming from. I don’t usually enjoy that style of book but in this case I found it interesting. Each of these women view the world in very different lights and seeing those vastly different views through their eyes was fascinating.

Now, I went into this book with general knowledge of the time period it is set in; during the reign of Caesar Augustus once his only daughter comes of age. The Caesar marries his daughter Julia off to a man he plans to groom to take his place as ruler of the mighty Roman empire. She is her father’s political toy, a pawn in the game. If you have any knowledge of the historical figure that is Julia then know that her life in the book follows many of the major events of her actual life. Turmoil, love, lust, duty, with a dash of selfishness is how she lives her life. Honestly, it is an overabundance of selfishness and it causes me to hate her fairly passionately. I muttered “self serving whore” more than once while reading her sections. I understood her point of view but at the same time wanted to punch her in the teeth. Frequently. I doubt that the cesar would have appreciated that from me.

Selene is a more interesting and vastly more likable character but she gets sadly few chapters focused on her. It’s really a shame, but I understand the story revolves more around Julia and Selene is, sadly, left in the dust. She does have one or two major roles to play but they are short lived so for now I will move on.

Livia is step mother to our frustratingly selfish Julia. I have to say that she at least tries to be a good one. It’s certainly not her fault that her step daughter is a miserable putz. She knows the political game and tries to play it with grace and intelligence. I can respect her for that. She holds the ear of her husband and knows how to play the game to influence his decisions. She is a strong, solid woman. Hard to have anything but a positive opinion about someone like that.

In the end, I’ve spent considerable time pondering what I really thought about the book and, in a nut shell, I’m still not entirely sure. Don’t get me wrong, there are a lot of good parts. Drama, intrigue, lust, war games, and enough of a touch of insanity to make it spicy but I’m just not sure it is enough. I will say, I re-read most of the books I own and won’t be re-reading this one so I guess, at least for me, that says enough. If the book doesn’t rank a re-read then it just isn’t good enough and that’s that.

To read, To write,To learn. I express through words.

Life should taste as good as books

“Interesting things did seem to happen, but always to somebody else.”