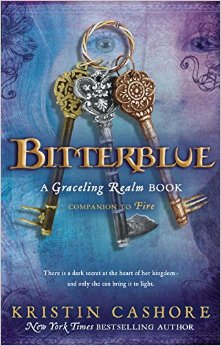 To many people this book is a bit controversial. My own sister is disgusted by it and refuses to re-read it and she re-reads everything. Even Lord of the Rings. While I love the story Tolkein crafted I can’t even get through those books once. I have been trying for over a decade. Maybe I’ll finish them before I’m dead. Somehow I doubt it.  Anyway, Bitterblue…

This is a book I turn to in times of need. When I’m depressed, sad, or desperately just need to escape wherever I am in life at that moment I pick up this book. I find it funny that my sister and I have such different reactions to it. While she abhors and avoids it, I turn to it in times of personal distress because it lifts me up. Funny how different two people can be.

There is something I can agree with her on, though. I’m not entirely sure this book should be listed for young adults (which it is).

Bitterblue is the story of a young queen trying to do her best for her people during troubling times. Her predecessor, her father, had left the kingdom in a state of upheaval.  He had murdered, raped, robbed, and tortured those he was sworn to protect. Bitterblue now has the unfortunate task of trying to right his wrongs and to restore peace and prosperity to her people whom she truly loves.

She isn’t alone in her task. A group of citizen vigilantes have taken it into their own hands to restore property that was stolen under the former king’s reign to it’s rightful owner. These vigilantes have a list of items that were taken and who they belonged to. Unfortunately this list also includes the names of men, women, and child who disappeared during the tyrannical reign.

This is the part that makes it not so suitable for young adults, in my opinion. The king had stolen people, including many children. He had them tortured, mutilated, and murdered. The women he took were raped and experimented on. While Bitterblue is on her path to better her people she also has to face her father’s demons. Her steadfastness and determination in the face of adversity are admirable traits. Those traits are why I keep coming back to this book again and again. It gives me hope.

Since this book does have a lot of little hidden meanings and twists and turns I will stop here as to not spoil them. I never want to ruin a good turn of plot for someone. Do keep in mind that this book is not for the overly sensitive at heart. There are a lot of topics in it that I feel shouldn’t be in the mind of the young adult but, never the less, it is still a good read. If you have the stomach for it I hope you enjoy it as much as I do.

As an afterword, there are also two other books in this series. They are Graceling and Fire. While I have read Graceling and found it slightly above mediocre I have not read Fire but am told by friends and family that it is quite good.

5 thoughts on “Bitterblue by Kristin Cashore”

The Musings of a Book Dragon

Rather Be In The Library
Katiej reads
alittlebutalot

Even if you're little you can do a lot