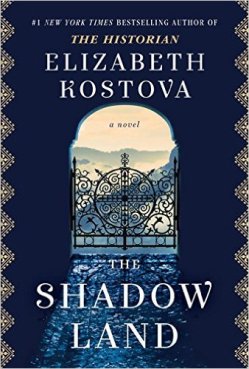 It is New Year’s Day 2017 and I figured what better way to start the year off than with a new book. I decided to do something different with my reading this coming year and entered myself in the 52 Book reading challenge both on Reddit and Goodreads. Goodreads allows you to easily keep track of what you have read, books you hope to read, and other suggested titles. The 52 Book Reddit community is still a little new to me but I’ve enjoyed conversations with other readers about books they have read or are reading, found reading suggestions from like minded folk, and have seen many readers who get encouragement to keep going by that community. I’ve very much enjoyed them.

Anyway, to The Shadow Land.

The author had previous success with her book The Historian, which is also on my future reading list, so I had opened this one with high hopes. We have a young American woman, Alexandra, who travels to Bulgaria to teach in honor of the memory of her dead brother who had wanted to visit the country. Alexandra, during her first few minutes in the city of Sofia, accidentally finds herself with someone else’s luggage. Once she discovers that she has someone else’s bag she is determined to find them to return it to them as the bag contains human ashes. Therein her adventure starts.

What struck me most about The Shadow Land is how the author, Kostova, is able to paint such beautiful pictures with her words. The book has enough detail to make the story clear in my mind without being obvious about it. She describes the towns that Alexandra visits so well that the descriptions themselves are enough to engulf me in the book. I think that is an art unto itself. Most books pull you in with their general story and plot, Kostova got me hooked with her lovingly rendered locations. I’ve run across very few author’s who are able to do that.

If it wasn’t her descriptions the book wouldn’t be worth reading. Once Alexandra discovers she has someone else’s belongings she has her cab driver take her to the police to report it. What is the obvious thing to do at this point? Leave the bag with the police. What does Alexandra do? She and her cab driver named Bobby traipse all over the country to try to return the bag to it’s owner. Yes, how very nice of her etc etc. Despite being nice it is ridiculous. She is in a country she has never been to where they speak a language she does not know where she and her cab driver that she also doesn’t know drive all over creation to find people she doesn’t know. With all honesty, without Bobby the story would be completely unreadable. Alexandra follows him and his orders like a puppy. She seems to have no original thoughts outside of the occasional ramble about her dead brother. Without her brother she would have absolutely zero personality or thoughts. It is infuriating.

The most interesting character in this story is, funnily enough, the dead man whose ashes she is carting around. During flash backs we get to see the man’s, Stoyan, life. He was an accomplished violinist and through a very simple error ended up a political prisoner. During his story we are with him in a prison forced labor camp. It breaks my heart all this man goes through trying to get back to his wife. The poor man certainly didn’t get a happily-ever-after.

I wanted to love this book. I really did. I couldn’t. I spent more time reading it getting frustrated with what seemed a pointless endeavor than anything else. All the beautiful story telling in the world couldn’t salvage it for me. After reading over 400 pages the conclusion, when you actually find out what was going on, is maybe three paragraphs. I wanted to throw it. I read that part twice hoping I had missed something that would make the rest of the story worth it but I was just left, well, frustrated. Not the kind of book I wanted to start the new year with.

This book was provided by Net Galley

3 thoughts on “The Shadow Land by Elizabeth Kostova”