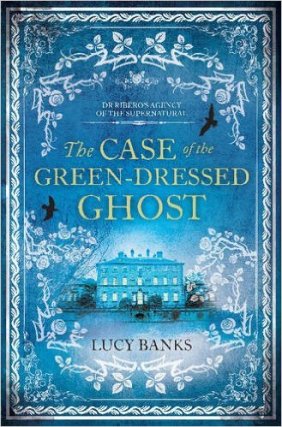 It has been a very long time since I finished a book in less than twenty-four hours. In fact, I was probably a teenager at the time. A time when responsibilities were few, your folks still gave you dinner every night, and free time was pretty much constant. Anyone else feeling nostalgic? Now we all have a to-do list a mile long and a pile of dirty dishes in the sink. Unless you have a maid. If you do I’m incredibly jealous. In any case…

After my last read, which was an utter disappointment of a story that lasted 200 pages too long, I wanted an easy read. A slam dunk. Needed to get my reading mojo back. So, I went with what appeared to be a nice sci-fi mystery. Even the title reminded me of a Scooby-Doo episode and what heathen doesn’t like Scooby?  There is even a mystery solving gang with a van! Fun, right?

We begin with Kester Lanner whose mother has recently passed. The last thing she said to him was a request to find a fellow named Dr. Ribero. Following his mother’s last request he manages to find Dr. Ribero in a dilapidated old building. Now, Kester is a lovable wuss and does not want to investigate in this building even though this is where he tracked Ribero to. Being loyal to his mother’s final request, he ventures into the building and finds himself thrown into what he previously thought was only fiction. The group of folks he finds inside hunts ghosts and banshees and all sorts of paranormal things. He also learns that the mysterious Dr. Ribero is his father. *dramatic music*

Kester finds himself pulled into this world of the supernatural and watching his discovery is just, well, fun! He has always been an awkward fellow and has very little confidence or courage in himself. Still, he joins this group of folks in their hunt (granted they sure pressured him into it) and discovers he has a rare power that significantly helps his father and the rest of the team in capturing these otherworldly creatures. Of course, it scares the pants right off of him. The reader gets to watch this young man with no confidence start to discover himself and his place in the world.

I very much enjoyed this book. It was simple and fun. After my previous read being such a let down this is exactly what I needed. The author states that this is the first book in a series featuring our paranormal fighting group and I am looking forward to reading more about them.

This book was provided by Net Galley