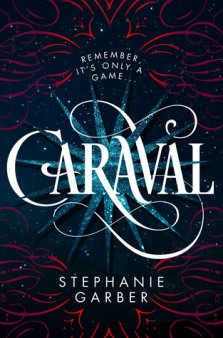 “Every person has the power to change their fate if they are brave enough to fight for what they desire more than anything.”

I had been looking forward to this book for months. I kept trying to get an ARC of it but no dice, had to wait for the release date like everyone else. Nearly pounced on the the poor UPS guy when he finally showed up with it at 5pm. How could I resist a book that promises magic, mystery, drama, and just a touch of heartbreak? Stick that all in a pot, give it a good stir, and you have yourself the makings of a good book.

Alright. Before I get too far along here, something has been nagging at me. I’ve read dozens of reviews of this books. The lucky ducks who did manage to get ARCs of it have been popping their thoughts up on Goodreads for weeks. Of all of them, I only read one or two that went, “Hey wait, does this remind any one else of The Night Circus?” Yes. Yes, it does. Thank you for saying so. We have the magic circus/carnival, the master/masters overseeing things with their own set of rules, a forbidden love, delicious and extraordinary food that is never seen outside of the venue, and Caraval even goes black and white for a few pages under a magical influence much like Le Cirque des Rêves is. I’m not complaining, mind you,  I just found it odd that no one was mentioning the parallels. Now that that is off of my chest…

We begin with two sisters, Donatella and Scarlett, who live a rather isolated life with their father. He is a hard and cruel man who takes any opportunity to physically and mentally punish them. I wanted to reach in the pages and slap him around. He had even gone as far as murdering a man who was trying to help his daughters. The girls want to escape their oppressive life and Scarlett means to give them that escape by marrying a count who would take them away from the prison they were forced to call home. When tickets arrive for them to get into the magical Caraval, a wrench gets thrown into her plans. She had always wanted to go but she knows her marriage and ticket to freedom are upcoming and if she goes to Caraval those will be taken from her forever.

Donatella has other plans and along with the help of a dashing sea captain, they kidnap Scarlett and head to the mysterious island that is home to Caraval. Upon arriving on the island Donatella immediately disappears which sends Scarlett into a frenzy as she feels it is her responsibility alone to watch out for Tella. That was irksome about Scarlett. Every action she took was about finding and saving Tella. It never occurs to her that Tella is an independent and intelligent woman who, perhaps, is capable of saving herself. So Scarlett along with Julian, the sea captain who took them to the island, enter into Caraval and begin their search for Tella.

Caraval itself is full of wonder and the fantastic. People come from all around to take part in it. During the day the guests are confined to their hotels but at night everything comes alive. The guests take part in solving a mystery. This year, the mystery is the disappearance of Donatella. There are clues, some they are given and some they must find, to lead them to the damsel in distress. Scarlett, of course, is frantic to find her sister. She and Julian follow the clues and find themselves pretty constantly in some sort of perilous peril.

The most enjoyable part of the story for me was Scarlett’s progression as a character. She starts off as this timid, rule abiding mouse but through her trials and tribulations within Caraval she grows into a more confident, strong woman.

There are many twists and turns through the story and with each page you learn more and more that Caraval can be a frightening place. The guests are warned at the beginning that everything is just a show and not too get too enraptured but it feels less and less like a performance with every passing chapter. Scarlett is caught up in the mystery and in finding her own confidence and heart and you will be, too. It is a lovely story that is very character driven. Admittedly, I would have liked a little more focus on the venue as I never did get a clear image of it in my head but overall well worth the read.

15 thoughts on “Caraval by Stephanie Garber”