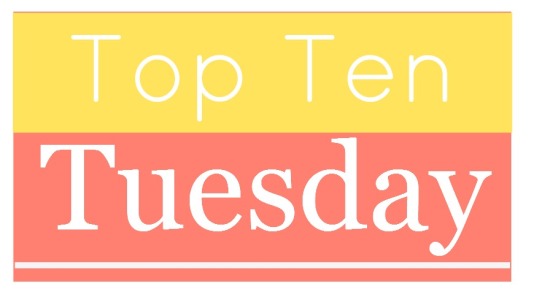 Here we are on another Tuesday so that means Top Ten Tuesday! The ladies at The Broke and the Bookish are taking a break in July so that means coming up with our own themes for the month. So as I pondered, weak and weary, an idea knocked on my chamber door. An idea, and nothing more (Oh yeah, I went there).

This week I’ll be bringing you the top ten past releases that I haven’t read yet. That means books that have been out for more than a year that I haven’t taken the time to pick up yet, but I want to.

Around the world, black hand prints are appearing on doorways, scorched there by winged strangers who have crept through a slit in the sky.

In a dark and dusty shop, a devil’s supply of human teeth grows dangerously low.

And in the tangled lanes of Prague, a young art student is about to be caught up in a brutal otherworldly war.

Meet Karou. She fills her sketchbooks with monsters that may or may not be real, she’s prone to disappearing on mysterious “errands”, she speaks many languages – not all of them human – and her bright blue hair actually grows out of her head that color. Who is she? That is the question that haunts her, and she’s about to find out.

When beautiful, haunted Akiva fixes fiery eyes on her in an alley in Marrakesh, the result is blood and starlight, secrets unveiled, and a star-crossed love whose roots drink deep of a violent past. But will Karou live to regret learning the truth about herself?

I know. I am probably the only jerk that hasn’t read this yet. I actually checked it out of the library over a week ago, read a couple pages, and didn’t pick it up again. I need to. From where I sit I can see it sitting on the counter. Taunting me. I’ll get to you, buddy.

Since birth, Nyx has been betrothed to the evil ruler of her kingdom-all because of a foolish bargain struck by her father. And since birth, she has been in training to kill him.

With no choice but to fulfill her duty, Nyx resents her family for never trying to save her and hates herself for wanting to escape her fate. Still, on her seventeenth birthday, Nyx abandons everything she’s ever known to marry the all-powerful, immortal Ignifex. Her plan? Seduce him, destroy his enchanted castle, and break the nine-hundred-year-old curse he put on her people.

But Ignifex is not at all what Nyx expected. The strangely charming lord beguiles her, and his castle—a shifting maze of magical rooms—enthralls her.

As Nyx searches for a way to free her homeland by uncovering Ignifex’s secrets, she finds herself unwillingly drawn to him. Even if she could bring herself to love her sworn enemy, how can she refuse her duty to kill him? With time running out, Nyx must decide what is more important: the future of her kingdom, or the man she was never supposed to love.

Yeah, this one is sitting in my house as well. Directly underneath Daughter of Smoke and Bone to be honest. The duo just sits there and stares at me. They mock me with their pretty covers. I’ll get there, alright?!

Ready Player One by Ernest Cline

In the year 2044, reality is an ugly place. The only time teenage Wade Watts really feels alive is when he’s jacked into the virtual utopia known as the  OASIS. Wade’s devoted his life to studying the puzzles hidden within this world’s digital confines, puzzles that are based on their creator’s obsession with the pop culture of decades past and that promise massive power and fortune to whoever can unlock them. When Wade stumbles upon the first clue, he finds himself beset by players willing to kill to take this ultimate prize. The race is on, and if Wade’s going to survive, he’ll have to win—and confront the real world he’s always been so desperate to escape.

Alright, I’m not usually into futurist type things but every time I see this book I itch to pick it up. I’m not sure I can read a book with a character named Wade without seeing Dead Pool in my head every time I see the name, though.

Told in Kvothe’s own voice, this is the tale of the magically gifted young man who grows to be the most notorious wizard his world has ever seen.

The intimate narrative of his childhood in a troupe of traveling players, his years spent as a near-feral orphan in a crime-ridden city, his daringly brazen yet successful bid to enter a legendary school of magic, and his life as a fugitive after the murder of a king form a gripping coming-of-age story unrivaled in recent literature.

A high-action story written with a poet’s hand, The Name of the Wind is a masterpiece that will transport readers into the body and mind of a wizard.

No, I still haven’t read this one. Fight me.

The Memorist (Reincarnationist #2) by M.J. Rose

As a child, Meer Logan was haunted by memories of another time and place, always accompanied by the faint strains of elusive music. Now the past has reached out again in the form of a strange letter that sets her on a journey to Vienna to unlock the mystery of who she once was. With each step, she comes closer to remembering connections between a clandestine reincarnationist society, a lost flute linked to Ludwig van Beethoven, and David Yalom, a journalist who understands all too well how the past affects the future. David knows loss first hand–terrorism is a reality that cost him his family. He’s seen every solution promised by security experts around the world–and he’s seen every solution fail. Now, in a concert hall in Vienna, he plans to force the world to understand the cost of those failures in a single, violent act.

I am a huge fan of Rose’s Reincarnationist series. Something I love about them is that I can read them out of order and it really doesn’t matter. I need to get my hands on this one. Admittedly, her writing isn’t for everyone but I adore it.

Pretty, flirtatious, and ambitious. Nan Bassett hopes that an appointment at the court of King Henry VIII will bring her a grand marriage. But soon after she becomes a maid of honor to Queen Jane, the queen dies in childbirth. As the court plunges into mourning, Nan sets her sights on the greatest match in the land…for the king has noticed her. After all, it wouldn’t be the first time King Henry has chosen to wed a maid of honor. And in newly Protestant England, where plots to restore the old religion abound, Nan may be the only one who can reassure a suspicious king of her family’s loyalty. But the favor of a king can be dangerous and chancy, not just for Nan, but for her family as well…and passionate Nan is guarding a secret, one that could put her future — and her life — in grave jeopardy should anyone discover the truth.

Historical fiction based on Henry VIII’s court? Sign me up. The Tudor period is one of the most fascinating times in history and my obsession with it knows no bounds. I will read pretty much anything to do with that bloody king’s time.

Jane Lambert, the quick-witted and alluring daughter of a silk merchant, is twenty-two and still unmarried. When Jane’s father finally finds her a match, she’s married off to the dull, older silk merchant William Shore—but her heart belongs to another. Marriage doesn’t stop Jane Shore from flirtation, however, and when the king’s chamberlain and friend, Will Hastings, comes to her husband’s shop, Will knows his King will find her irresistible.

Edward IV has everything: power, majestic bearing, superior military leadership, a sensual nature, and charisma. And with Jane as his mistress, he also finds true happiness. But when his hedonistic tendencies get in the way of being the strong leader England needs, his life, as well as that of Jane Shore and Will Hastings, hang in the balance.

So, Top Seven Tuesday. Doesn’t have the same ring but those are seven books all released more than two years ago that I want to read.

What are some blast from the past books you’ve been wanting to pick up?