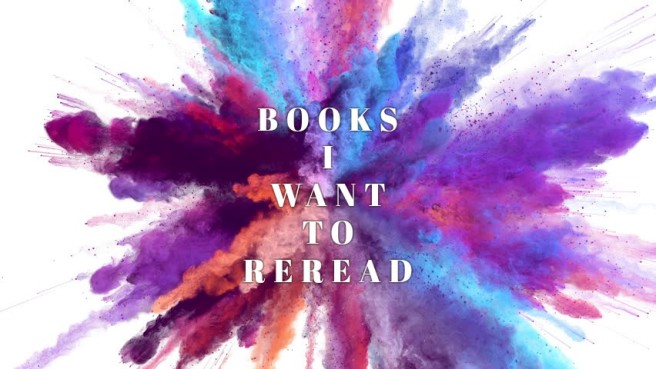 The other day on Twitter I spotted a tweet by fellow book blogger Fernanda @ The Wanderlust Reader. She was discussing the possibility of doing a read-a-thon that specifically focuses on re-reads. It got me thinking, what books would I most like to re-read? 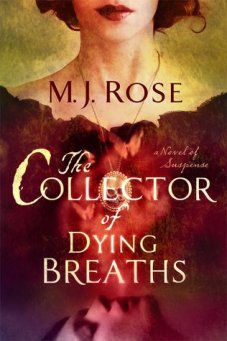 The Collector of Dying Breaths (Reincarnationist #6) by M.J. Rose – A lush and imaginative novel that crisscrosses time as a perfumer and a mythologist search for the fine line between potion and poison, poison and passion…and past and present.

Florence, Italy—1533: An orphan named René le Florentin is plucked from poverty to become Catherine de Medici’s perfumer. Traveling with the young duchessina from Italy to France, René brings with him a cache of secret documents from the monastery where he was trained: recipes for exotic fragrances and potent medicines—and a formula for an alchemic process said to have the potential to reanimate the dead. In France, René becomes not only the greatest perfumer in the country but the most dangerous, creating deadly poisons for his Queen to use against her rivals. But while mixing herbs and essences under the light of flickering candles, Rene doesn’t begin to imagine the tragic and personal consequences for which his lethal potions will be responsible.

Paris, France—The Present: A renowned mythologist, Jac L’Etoile, is trying to recover from personal heartache by throwing herself into her work, learns of the 16th century perfumer who may have been working on an elixir that would unlock the secret to immortality. She becomes obsessed with René le Florentin’s work—particularly when she discovers the dying breathes he had collected during his lifetime. Jac’s efforts put her in the path of her estranged lover, Griffin North, a linguist who has already begun translating René le Florentin’s mysterious formula. Together they confront an eccentric heiress in possession of a world-class art collection. A woman who has her own dark purpose for the elixir… a purpose for which she believes the ends will justify her deadly means. This mesmerizing gothic tale of passion and obsession crisscrosses time, zigzagging from the violent days of Catherine de Medici’s court to twenty-first century France. Fiery and lush, set against deep, wild forests and dimly lit chateaus, The Collector of Dying Breaths illuminates the true path to immortality: the legacies we leave behind.

The Water Room (Bryant and May #2) by Christopher Fowler – They are detection’s oddest couple: two cranky detectives whose professional partnership dates back half a century. Now Arthur Bryant and John May return in a case of multiple murder that twists through a subterranean course of the secrets, lies, and extreme passions that drive even ordinary men and women to the most shocking crimes….

They are living legends with a reputation for solving even the trickiest cases using unorthodox, unconventional, and often completely unauthorized methods. But the Peculiar Crimes Unit headed by Detectives John May and Arthur Bryant is one mistake away from being shut down for good. And when the elderly sister of Bryant’s friend is found dead in the basement of her decrepit house in Kentish Town, they find themselves on the verge of making exactly that mistake.

According to the coroner, Ruth Singh’s heart simply stopped beating. But why was a woman who rarely left the house fully dressed for an outing? And why was there river water in her throat? Convinced that the old lady didn’t die a natural death, the detectives delve into a murky case with no apparent motive, no forensics, and no clues. And they’ve barely launched their investigation when death claims another victim. Suddenly they discover some very unnatural behavior surrounding Ruth Singh’s death by “natural” causes—from shady real estate developers and racist threats to two troubled marriages, from a dodgy academician working London’s notorious “grey economy” to a network of antiquities collectors obsessed with Egyptian mythology. And running beneath it all are the sweeping tentacles of London’s vast and forgotten underground river system. As the rains pour down and the water rises, Bryant and May must rely on instinct, experience, and their own very peculiar methods to stem a tide of evil that threatens to drown them all.

The Tale of Holly How (The Cottage Tales of Beatrix Potter #2) by Susan Wittig Albert – Everyone in Sawrey likes Ben Hornby. So when Beatrix finds the shepherd dead in the meadow and suspects foul play, she wonders who would have done such a thing. A trio of village cats has an idea: When Ben breathed his last, his sheep must have seen his killer before scattering. So they set out to find the far-flung flock. Although she’s distracted by duties at the farm and the sad plight of a young girl, Beatrix must get to the bottom of this. As the stories intertwine, Beatrix and the creatures realize that, to solve this case, all of Sawrey, both the two- and four-legged inhabitants, must work together…

An astonishingly rich re-creation of the land of Oz, this book retells the story of Elphaba, the Wicked Witch of the West, who wasn’t so wicked after all. Taking readers past the yellow brick road and into a phantasmagoric world rich with imagination and allegory, Gregory Maguire just might change the reputation of one of the most sinister characters in literature.

The Night Circus by Erin Morgenstern – The circus arrives without warning. No announcements precede it. It is simply there, when yesterday it was not. Within the black-and-white striped canvas tents is an utterly unique experience full of breathtaking amazements. It is called Le Cirque des Rêves, and it is only open at night.

But behind the scenes, a fierce competition is underway – a duel between two young magicians, Celia and Marco, who have been trained since childhood expressly for this purpose by their mercurial instructors. Unbeknownst to them, this is a game in which only one can be left standing, and the circus is but the stage for a remarkable battle of imagination and will. Despite themselves, however, Celia and Marco tumble headfirst into love – a deep, magical love that makes the lights flicker and the room grow warm whenever they so much as brush hands.

True love or not, the game must play out, and the fates of everyone involved, from the cast of extraordinary circus per­formers to the patrons, hang in the balance, suspended as precariously as the daring acrobats overhead.

The Queen of the Damned (The Vampire Chronicles #3) by Anne Rice – Did you ever wonder where all those mischievous vampires roaming the globe in Anne Rice’s Vampire Chronicles came from? In this, the third book in the series, we find out. That raucous rock-star vampire Lestat interrupts the 6,000-year slumber of the mama of all bloodsuckers, Akasha, Queen of the Damned.

Akasha was once the queen of the Nile (she has a bit in common with the Egyptian goddess Isis), and it’s unwise to rile her now that she’s had 60 centuries of practice being undead. She is so peeved about male violence that she might just have to kill most of them. And she has her eye on handsome Lestat with other ideas as well.

A Court of Mist and Fury by Sarah J Maas – Feyre survived Amarantha’s clutches to return to the Spring Court—but at a steep cost. Though she now has the powers of the High Fae, her heart remains human, and it can’t forget the terrible deeds she performed to save Tamlin’s people.
Nor has Feyre forgotten her bargain with Rhysand, High Lord of the feared Night Court. As Feyre navigates its dark web of politics, passion, and dazzling power, a greater evil looms—and she might be key to stopping it. But only if she can harness her harrowing gifts, heal her fractured soul, and decide how she wishes to shape her future—and the future of a world cleaved in two.

These are just some of the books that I’d like to reread before too much time has passed. If Fernanda does the rereadathon that she was considering it would give me that extra push to pick up these titles again. What books would you most like to reread?

6 thoughts on “Books I Want To Re-Read”