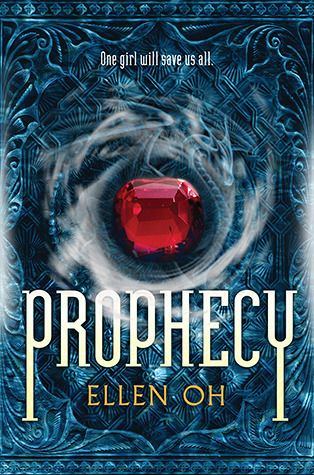 The greatest warrior in all of the Seven Kingdoms… is a girl with yellow eyes.

Kira’s the only female in the king’s army, and the prince’s bodyguard. She’s a demon slayer and an outcast, hated by nearly everyone in her home city of Hansong. And, she’s their only hope…

Murdered kings and discovered traitors point to a demon invasion, sending Kira on the run with the young prince. He may be the savior predicted in the Dragon King Prophecy, but the missing treasure of myth may be the true key. With only the guidance of the cryptic prophecy, Kira must battle demon soldiers, evil shaman, and the Demon Lord himself to find what was once lost and raise a prince into a king.

Intrigue and mystery, ancient lore and action-packed fantasy come together in this heart-stopping first book in a trilogy.

Does this book sound like it has a plot that has been used over and over again? Sure. Does that necessarily make it a bad book? No way. Okay, I admit, I only clicked on it because that ruby on the cover looked like an apple so (without a single glance at the description) I had initially assumed it would be a fairy tale retelling. When I read the description it was a bit of a let down but that is okay, there is still potential in those pages.