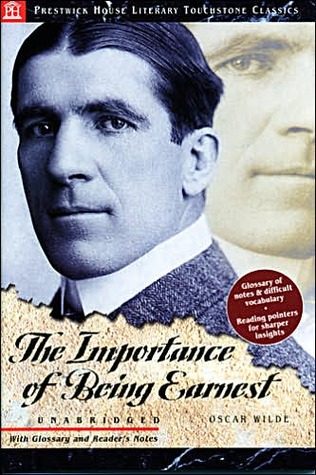 Title: The Importance of Being Earnest by Oscar Wilde

Oscar Wilde’s madcap farce about mistaken identities, secret engagements, and lovers entanglements still delights readers more than a century after its 1895 publication and premiere performance. The rapid-fire wit and eccentric characters of The Importance of Being Earnest have made it a mainstay of the high school curriculum for decades.

Cecily Cardew and Gwendolen Fairfax are both in love with the same mythical suitor. Jack Worthing has wooed Gewndolen as Ernest while Algernon has also posed as Ernest to win the heart of Jack’s ward, Cecily. When all four arrive at Jack’s country home on the same weekend the “rivals” to fight for Ernest s undivided attention and the “Ernests” to claim their beloveds pandemonium breaks loose. Only a senile nursemaid and an old, discarded hand-bag can save the day!

We are going way back in our throwback today with my beloved Oscar Wilde. I feel like I have done him a disservice because, while I have read A Picture of Dorian Grey on multiple occasions, I have not read through the entirety of this play. Hopefully I remedy that mistake soon. Wilde’s works are witty and entertaining and will go down as some of the most influential literature in history.

Oscar Fingal O’Flahertie Wills Wilde was an Irish playwright, poet and author of numerous short stories and one novel. Known for his biting wit, and a plentitude of aphorisms, he became one of the most successful playwrights of the late Victorian era in London, and one of the greatest celebrities of his day. Several of his plays continue to be widely performed, especially The Importance of Being Earnest.

As the result of a widely covered series of trials, Wilde suffered a dramatic downfall and was imprisoned for two years hard labour after being convicted of “gross indecency” with other men. After Wilde was released from prison he set sail for Dieppe by the night ferry. He never returned to Ireland or Britain, and died in poverty. (from Goodreads)

“Oh! I don’t think I would like to catch a sensible man. I shouldn’t know what to talk to him about.”