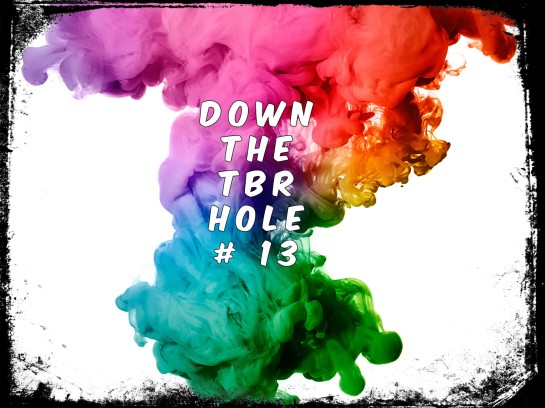 Welcome once again to Down the TBR Hole! This is my twelfth time doing this and, unfortunately, I’ve added several books to my TBR since the last time I did this. I just couldn’t help myself! So many wonderful sounding books are being announced, I would be remiss to leave any of them out. Lets see if we can cull any of the older ones today, shall we?

Wicked Like a Wildfire (Hibiscus Daughter #1) by Lana Popović  – All the women in Iris and Malina’s family have the unique magical ability or “gleam” to manipulate beauty. Iris sees flowers as fractals and turns her kaleidoscope visions into glasswork, while Malina interprets moods as music. But their mother has strict rules to keep their gifts a secret, even in their secluded sea-side town. Iris and Malina are not allowed to share their magic with anyone, and above all, they are forbidden from falling in love.

But when their mother is mysteriously attacked, the sisters will have to unearth the truth behind the quiet lives their mother has built for them. They will discover a wicked curse that haunts their family line—but will they find that the very magic that bonds them together is destined to tear them apart forever?

When I first heard about this book I was very excited for an opportunity to read it. However, since its release in August it’s average rating has been steadily dipping. I think it is  going to stick around for now but I must admit I am no longer quite as excited for it.

A Twist in Time (Kendra Donovan #2) by Julie McElwain – Former FBI agent Kendra Donovan’s attempts to return to the twenty-first century have failed, leaving her stuck at Aldridge Castle in 1815. And her problems have just begun: in London, the Duke of Aldridge’s nephew Alec—Kendra’s confidante and lover—has come under suspicion for murdering his former mistress, Lady Dover, who was found viciously stabbed with a stiletto, her face carved up in a bizarre and brutal way.

Lady Dover had plenty of secrets, and her past wasn’t quite what she’d made it out to be. Nor is it entirely in the past—which becomes frighteningly clear when a crime lord emerges from London’s seamy underbelly to threaten Alec. Joining forces with Bow Street Runner Sam Kelly, Kendra must navigate the treacherous nineteenth century while she picks through the strands of Lady Dover’s life.

As the noose tightens around Alec’s neck, Kendra will do anything to save him, including following every twist and turn through London’s glittering ballrooms, where deception is the norm—and any attempt to uncover the truth will get someone killed.

I’m on a fence. On one hand this sounds like a good book, but many of the reviews say that the romantic portion gets a little out of hand from time to time. Also, it is the second book in the series and I have no recollection of reading the first one. Hhmm….

Vicious (The Villains #1) by V.E. Schwab – Victor and Eli started out as college roommates—brilliant, arrogant, lonely boys who recognized the same sharpness and ambition in each other. In their senior year, a shared research interest in adrenaline, near-death experiences, and seemingly supernatural events reveals an intriguing possibility: that under the right conditions, someone could develop extraordinary abilities. But when their thesis moves from the academic to the experimental, things go horribly wrong.

Ten years later, Victor breaks out of prison, determined to catch up to his old friend (now foe), aided by a young girl whose reserved nature obscures a stunning ability. Meanwhile, Eli is on a mission to eradicate every other super-powered person that he can find—aside from his sidekick, an enigmatic woman with an unbreakable will. Armed with terrible power on both sides, driven by the memory of betrayal and loss, the archnemeses have set a course for revenge—but who will be left alive at the end?

Now I Rise (The Conqueror’s Saga #2) by Kiersten White  – She has no allies. No throne. All she has is what she’s always had: herself.

After failing to secure the Wallachian throne, Lada Dracul is out to punish anyone who dares to cross her blood-strewn path. Filled with a white-hot rage, she storms the countryside with her men, accompanied by her childhood friend Bogdan, terrorizing the land. But brute force isn’t getting Lada what she wants. And thinking of Mehmed brings little comfort to her thorny heart. There’s no time to wonder whether he still thinks about her, even loves her. She left him before he could leave her.

What Lada needs is her younger brother Radu’s subtlety and skill. But Mehmed has sent him to Constantinople—and it’s no diplomatic mission. Mehmed wants control of the city, and Radu has earned an unwanted place as a double-crossing spy behind enemy lines. Radu longs for his sister’s fierce confidence—but for the first time in his life, he rejects her unexpected plea for help. Torn between loyalties to faith, to the Ottomans, and to Mehmed, he knows he owes Lada nothing. If she dies, he could never forgive himself—but if he fails in Constantinople, will Mehmed ever forgive him?

As nations fall around them, the Dracul siblings must decide: what will they sacrifice to fulfill their destinies? Empires will topple, thrones will be won…and souls will be lost.

Honestly, I tried to read And I Darken and was utterly bored. Maybe it was her writing style, which I admit felt cumbersome to me, maybe it was the story. Either way, I don’t believe I’ll be continuing with this series.

The Archived (The Archived #1) by Victoria Schwab  – Imagine a place where the dead rest on shelves like books.

Each body has a story to tell, a life seen in pictures only Librarians can read. The dead are called Histories, and the vast realm in which they rest is the Archive.

Da first brought Mackenzie Bishop here four years ago, when she was twelve years old, frightened but determined to prove herself. Now Da is dead, and Mac has grown into what he once was: a ruthless Keeper, tasked with stopping often violent Histories from waking up and getting out. Because of her job, she lies to the people she loves, and she knows fear for what it is: a useful tool for staying alive.

Being a Keeper isn’t just dangerous—it’s a constant reminder of those Mac has lost, Da’s death was hard enough, but now that her little brother is gone too, Mac starts to wonder about the boundary between living and dying, sleeping and waking. In the Archive, the dead must never be disturbed. And yet, someone is deliberately altering Histories, erasing essential chapters. Unless Mac can piece together what remains, the Archive itself may crumble and fall.

Two Schwab books on my list in one week? It must be Christmas. I think you know what I am going to say…

To say the least that was not a successful TBR purging. Only one book and, if I am being honest, I waffled over that one. Oh well. Wouldn’t want to delete something that I still have the potential to read! Have you read any of these? Should one have got the ax that didn’t? Tell me in the comments!