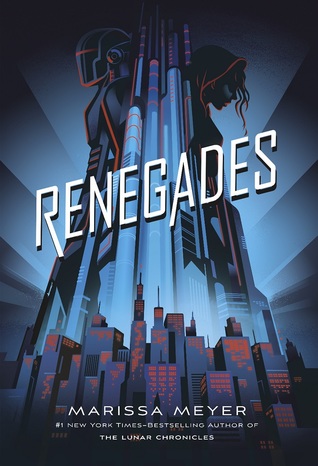 “There are many dangerous people in this world. But there are also many good people. Brave People. No matter how bad things get, we have to remember that. So long as there are heroes in this world, there’s hope that tomorrow might be better.”

When this book was first announced, I admit, I was excited but wary. Meyer’s writing and I don’t always get along. For instance, I loved Heartless but Cinder left me disappointed. The premise for this one sounded marvelous but I was afraid I was going to be let down again so I tried not to get my hopes up.

Most of us here know the premise, but I’ll throw it out there if anyone is in the dark or needs a refresher.

Nova has a reason to hate the Renegades, and she is on a mission for vengeance. As she gets closer to her target, she meets Adrian, a Renegade boy who believes in justice—and in Nova. But Nova’s allegiance is to a villain who has the power to end them both. (Goodreads)

What I was hoping for in this story were full out battles in an epic fight between good and evil. I wanted amazing superpowers, characters with a lot of depth, and a story that just wouldn’t quit.

What I got was our lead character, Nova, for the Anarchists, the supposed baddies, whose superpower was completely dull. Sure, she can build things, she is good with technology, but for being a so called super hero she was really a let down. At no point during the story was I able to discern an actually personality for Nova. She had reasons for doing things but she was just like any low ball YA strong female I have read before. Nothing to write home about.

Then we have the leading male, Adrian, for the Renegades, the supposed good guys. With him I also had issues. Predictable, lack of personality, and just so damn “good guy” that I wanted to punch him just to give him a bit of character. Little Adrian just wants to save the world and settle past heart ache. I’ve eaten beans more interesting than he was.

I’m going to keep this short, this book really isn’t worth the time unless you are a serious Meyer fan. Even the little cliff hanger at the end didn’t leave me aching for more. I just found myself not caring. Is this the right book for some people? Sure. Absolutely. But not for me. If the cover wasn’t so darn pretty I would donate it to the library.