Title: The Last Necromancer (The Ministry of Curiosities #1) by C.J. Archer

Victorian London: For five years, Charlotte (Charlie) Holloway has lived as a boy in the slums. But when one theft too many gets her arrested, her only means of escape lies with a dead man. Charlie hasn’t raised a spirit since she first discovered she could do so five years ago. That time, her father banished her. This time, she brings even more trouble upon herself.

People are now hunting Charlie all over London, but only one man succeeds in capturing her.

Lincoln Fitzroy is the mysterious head of a secret organization on the trail of a madman who needs a necromancer to control his newly “made” creatures. There was only one known necromancer in the world – Charlotte – but now there appears to be two. Lincoln captures the willful Charlie in the hopes the boy will lead him to Charlotte. But what happens when he discovers the boy is in fact the young woman he’s been searching for all along? And will she agree to work for the man who held her against her will, and for an organization she doesn’t trust?

Because Lincoln and his ministry might be just as dangerous as the madman they’re hunting. (from Goodreads)

“Fitzroy stood over the body, his arms rigid at his sides, a bloody dagger in each hand. His loose hair fell to his eyes in ragged tangles. He was covered in blood, some of it probably his, and looked very much like an avenging devil” 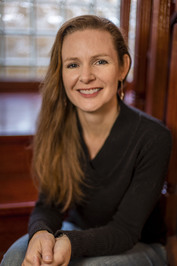 C.J. Archer has loved history and books for as long as she can remember and feels fortunate that she found a way to combine the two. She spent her early childhood in the dramatic beauty of outback Queensland, Australia, but now lives in suburban Melbourne with her husband, two children and a mischievous black & white cat named Coco.

While she has written historical romance in the past, she now writes exclusively in the historical fantasy genre (with a large dose of romance). She has several series which occur in the same Victorian-era “world”. Each series can be read alone, but it’s more fun to start at the beginning with THE EMILY CHAMBERS SPIRIT MEDIUM TRILOGY. Follow that up with all 9 FREAK HOUSE books, then the MINISTRY OF CURIOSITIES series. GLASS AND STEELE, her newest series, is set in an entirely different alternate Victorian London.

She loves to hear from readers. You can contact her through email cj@cjarcher.com or follow her on social media to get the latest updates on her books. (Goodreads)

I read this book in late 2017 and, while I didn’t write a formal review of it, I did really enjoy it and granted it four stars on Goodreads. It was one of those books that you didn’t need real brain power to read and yet it still made sense and was a fluid, well thought out story. Currently I am reading the third book in this series and would recommend them to lovers of historical fantasy.

One thought on “Throwback Thursday – The Last Necromancer (The Ministry of Curiosities #1) by C.J. Archer”