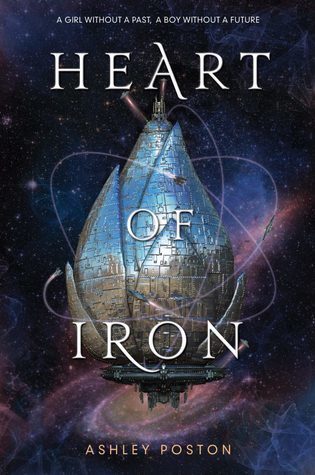 Seventeen-year-old Ana is a scoundrel by nurture and an outlaw by nature. Found as a child drifting through space with a sentient android called D09, Ana was saved by a fearsome space captain and the grizzled crew she now calls family. But D09—one of the last remaining illegal Metals—has been glitching, and Ana will stop at nothing to find a way to fix him.

Ana’s desperate effort to save D09 leads her on a quest to steal the coordinates to a lost ship that could offer all the answers. But at the last moment, a spoiled Ironblood boy beats Ana to her prize. He has his own reasons for taking the coordinates, and he doesn’t care what he’ll sacrifice to keep them.

When everything goes wrong, she and the Ironblood end up as fugitives on the run. Now their entire kingdom is after them—and the coordinates—and not everyone wants them captured alive.

What they find in a lost corner of the universe will change all their lives—and unearth dangerous secrets. But when a darkness from Ana’s past returns, she must face an impossible choice: does she protect a kingdom that wants her dead or save the Metal boy she loves?

I have some really mixed feelings about this book. It didn’t even pop up on my reading radar until a week or two before its release but something about that cover screamed, “I need to be on your shelf!” Honestly, the cover is absolutely beautiful in person, shiny and gorgeous. However, I wasn’t exactly sure what so expect from the story. The author’s previous book, Geekerella, held no interest for me so I hadn’t been exposed to Poston’s writing before. It was an interesting experience.

This really was a good book. It held my attention cover to cover even though there were some aspects that could certainly have done with a little more attention. I truly think that if things hadn’t been so rushed this easily would have been a 4 or 4.5 read for me. The cast was interesting, the plot had weight and a purpose, and there was plenty of action to keep things moving. I will definitely be keeping my eye out for the next book in this series!