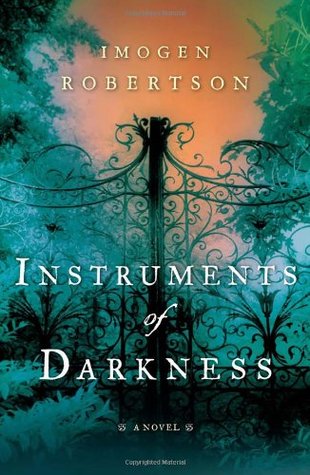 Title: Instruments of Darkness (Crowther and Westerman #1) by Imogen Robertson

In the year 1780, Harriet Westerman, the willful mistress of a country manor in Sussex, finds a dead man on her grounds with a ring bearing the crest of Thornleigh Hall in his pocket. Not one to be bound by convention or to shy away from adventure, she recruits a reclusive local anatomist named Gabriel Crowther to help her find the murderer, and historical suspense’s newest investigative duo is born.

For years, Mrs. Westerman has sensed the menace of neighboring Thornleigh Hall, seat of the Earl of Sussex. It is the home of a once- great family that has been reduced to an ailing invalid, his whorish wife, and his alcoholic second son, a man haunted by his years spent as a redcoat in the Revolutionary War. The same day, Alexander Adams is slain by an unknown killer in his London music shop, leaving his children orphaned. His death will lead back to Sussex, and to an explosive secret that has already destroyed one family and threatens many others.

Instruments of Darkness combines the brooding atmosphere of Anne Perry with the complex, compelling detail of Tess Gerritsen, moving from drawing room to dissecting room, from coffee house to country inn. Mrs. Westerman and Mr. Crowther are both razor-sharp minds and their personalities breathe spirit into this gripping historical mystery. (from Goodreads) 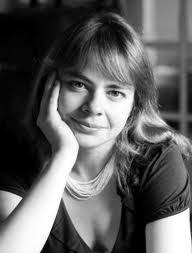 Imogen Robertson grew up in Darlington, studied Russian and German at Cambridge and now lives in London. She directed for film, TV and radio before becoming a full-time author and won the Telegraph’s ‘First thousand words of a novel’ competition in 2007 with the opening of Instruments of Darkness, her first novel. Her other novels also featuring the detective duo of Harriet Westerman and Gabriel Crowther are Anatomy of Murder, Island of Bones and Circle of Shadows. The Paris Winter, a story of betrayal and darkness set during the Belle Époque, will be published in the US by St Martin’s Press in November 2014. She has been short-listed for the CWA Ellis Peters Historical Dagger twice and is married to a freelance cheesemonger.