It was a four-day journey by train from the coast to the desert where the Tower of Babel rose like a tusk from the jaw of the earth. First, they had crossed pastureland, spotted with fattening cattle and charmless hamlets, and then their train had climbed through a range of snow-veined mountains where the condors roosted in nests large as haystacks. Already, they were farther from home than they had ever been.

They descended through shale foothills, which he said reminded him of a field of shattered blackboards, through cypress tress, which she said looked like open parasols, and finally they came upon the arid basin. The ground was the color of rusted chains, and the dust of it clung to everything.

The desert was far from deserted. Their train shared a direction with a host of caravans, each a slithering line of wheels, hooves, and feet. Over the course of the morning, the bands of traffic thickened until they converged into a great mass so dense that their train was forced to slow to a crawl. Their cabin seemed to wade through the boisterous tide of the stagecoaches and ox-drawn wagons, through the tourists, pilgrims, migrants, and merchants from every state in the vast nation of Ur. 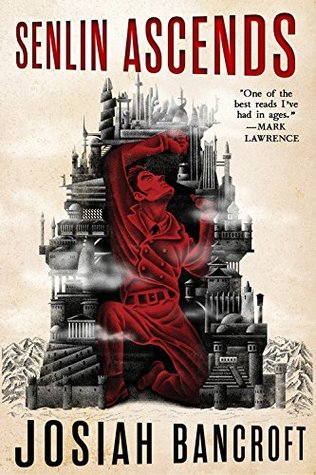 Senlin Ascends (The Books of Babel #1) by Josiah Bancroft

That last couple of months I have spotted this book floating through various blogs and mentions on Twitter. Previously, though it was released originally in 2013, I had not heard of it. Each time I spotted it I became more and more curious until I finally picked it up from the library. Honestly, I was shocked and amazed that my local library had it in circulation! So far, the story is interesting and I hope to read through more of it soon.

The Tower of Babel is the greatest marvel in the world. Immense as a mountain, the ancient Tower holds unnumbered ringdoms, warring and peaceful, stacked one on the other like the layers of a cake. It is a world of geniuses and tyrants, of airships and steam engines, of unusual animals and mysterious machines.

Soon after arriving for his honeymoon at the Tower, the mild-mannered headmaster of a small village school, Thomas Senlin, gets separated from his wife, Marya, in the overwhelming swarm of tourists, residents, and miscreants.

Senlin is determined to find Marya, but to do so he’ll have to navigate madhouses, ballrooms, and burlesque theaters. He must survive betrayal, assassination, and the long guns of a flying fortress. But if he hopes to find his wife, he will have to do more than just endure.

This quiet man of letters must become a man of action. (from Goodreads)