No commonplace death would require Alex’s presence at such an ungodly hour; calls to the house of a Reader at two in the morning were never of a social nature. She girded her emotional barriers for the possibility of brutal murder and sent up a silent request that it would not involve a child. Those were the worst, though, of course, none were ever pleasant.

Someone rang the front entry bell just as she was about to put out her candle and attempt sleep. Mrs. Harris, the housekeeper, was away visiting relations for the holiday, taking along the page and the maid, so Alex herself slipped downstairs. She did not bother with slippers, throwing a blanket about her shoulders against the chill. 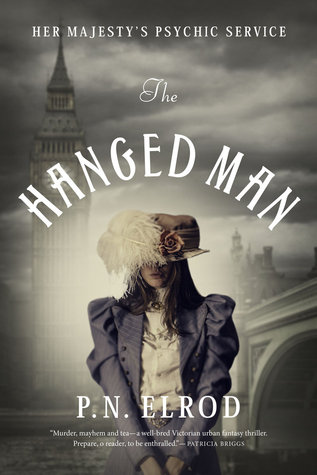 The Hanged Man (Her Majesty’s Psychic Service #1) by P.N. Elrod

When I first heard about this book I was desperate to get a hold of it. So, I got on Thriftbooks and managed to pick this one up for 3$ “used” because it came sealed in plastic with a merchant’s sticker still on it. So, got this brand new for 3$, can’t complain. Of course, once it arrived it got tucked away on a shelf and forgotten. It is disgusting how often I do that. I really need to start on it because it truly does sound like just my kind of book.

On a freezing Christmas Eve in 1879, a forensic psychic reader is summoned from her Baker Street lodgings to the scene of a questionable death. Alexandrina Victoria Pendlebury (named after her godmother, the current Queen of England) is adamant that the death in question is a magically compromised murder and not a suicide, as the police had assumed, after the shocking revelation contained by the body in question, Alex must put her personal loss aside to uncover the deeper issues at stake, before more bodies turn up.

Turning to some choice allies—the handsome, prescient Lieutenant Brooks, the brilliant, enigmatic Lord Desmond, and her rapscallion cousin James—Alex will have to marshal all of her magical and mental acumen to save Queen and Country from a shadowy threat. Our singular heroine is caught up in this rousing gaslamp adventure of cloaked assassins, meddlesome family, and dark magic. (from Goodreads)