In my Book Spotlight piece I will be bringing you an upcoming release and/or cover reveal. These books are ones I am excited about whether they are from a new or an established author. This week we have a book that I have been near begging Netgalley and First to Read for, The Mortal Word (The Invisible Library #5) by Genevieve Cogman. 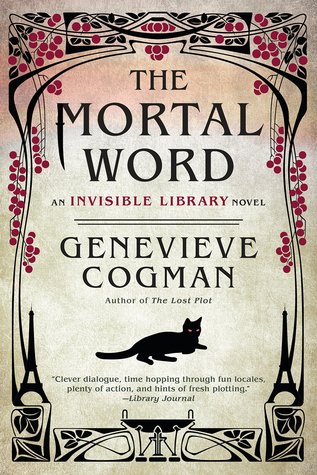 Title: The Mortal Word (The Invisible Library #5) by Genevieve Cogman
Expected publication: November 27, 2018
Publisher: Ace
In the latest novel in Genevieve Cogman’s historical fantasy series, the fate of worlds lies in the balance. When a dragon is murdered at a peace conference, time-travelling Librarian spy Irene must solve the case to keep the balance between order, chaos…and the Library.

When Irene returns to London after a relatively straightforward book theft in Vienna, Bradamant informs her that there is a top secret dragon-Fae peace conference in progress that the Library is mediating, but that the second-in-command dragon has been stabbed to death. Tasked with solving the case, Vale and Irene immediately go to 1890s Paris.

Once they arrive, it seems that the murder victim had uncovered evidence suggesting that he may have found proof of treachery by one or more Librarians. But to ensure the peace of the conference, some Librarians are already hostages in the dragon and Fae courts. To save the captives, including her parents, Irene must get to the bottom of this murder – but was it dragon, Fae, or even a Librarian who committed the crime?”

I am incredibly excited over this book. Over the past year or so I have devoured the first four books in the series and have loved all of them. Not to mention at the end of the last book, The Lost Plot (The Invisible Library #4) by Genevieve Cogman, there was a lovely bit which would add some exciting new plot points to the series. It was also recently announced that Cogman has a deal to publish another three books in The Invisible Library world. If you haven’t started on this series, I highly recommend that you do!

Genevieve Cogman got started on Tolkien and Sherlock Holmes at an early age, and has never looked back. But on a perhaps more prosaic note, she has an MSC in Statistics with Medical Applications and has wielded this in an assortment of jobs: clinical coder, data analyst and classifications specialist. Although The Invisible Library is her debut novel, she has also previously worked as a freelance roleplaying game writer. Genevieve Cogman’s hobbies include patchwork, beading, knitting and gaming, and she lives in the north of England. (Goodreads)

Reviews of The Invisible Library series